View source
watch 01:36
We're Getting Mutants in the MCU - The Loop
Do you like this video?
Play Sound

Tenrai (天来, Tenrai?) was a powerful sorcerer that foolishly thought he could control Lord Mei-Oh. His servants were called the Lords of Darkness.

In Rikimaru's story, Tenrai makes several attempts to recruit Rikimaru to his cause while keeping close observation on the Azuma Ninja, while the events of the game unfold. He revives Onikage, who battles with Rikimaru in the Limestone cavern and at Tenrai's fortress and he even revivies Tatsumaru to kill Rikimaru. Tenrai orders one of his men to take the form of Ayame and attack Lord Gohda resulting in her imprisonment to lure Rikimaru to the Bamboo forest to serve as a destraction while his forces attack the Buddha Temple under the command of Kagura and Ganda. Rikimaru arrives and kills Kagura, with Ganda being killed by Tatsumaru, after a short battle, Tatsumaru reveals how to defeat Tenrai. Enraged by his betrayal ,Tenrai kills Tatsumaru by extinguishing a candle which represents his life force, Tenrai attempts to recruit Rikimaru one more time before inviting him to avenge Tatsumaru's death by attacking his fortress. Rikimaru confronts Tenrai and is shocked when his attempts have little effect and watches as Tenrai absorbs the power of Lord Mei-Oh to fight Rikimaru. Rikimaru is blinded and battered by Tenrai, but unlocks the hidden power behind his right eye revealed by Tatsumaru and fights Tenrai. Ayame comes to Rikimaru's aid after another battle and recovers his sword giving Rikimaru the strength to kill Tenrai in one last fight. However, soon Rikimaru and Ressai fix the Izayoi with the steel the blacksmith has on hand, then the Azuma ninja impales himself with a minor injury in order to finally kill Tenrai.

In Ayame's story, the wizard Tenrai is after three magic jewels which hold great power, using an unknown assailant he recovers one of the jewels in the first mission from the merchant Nasu (那須) and Echigoya. A member of his army - Hamada (浜田康之助 Hamada Kōnosuke), holds Lord Gohda hostage seeking the jewel of Virtue but he is killed by Ayame, forcing Tenrai to posess his body and express his desire for the three jewels prompting Ayame to search for the others before Tenrai. Eventually Tenrai gains posession of a second jewel forcing Lord Gohda to send Ayame to Tenrai's fortress, through a secret entrance in the Limestone Cavern to assassinate him. Ayame recieves a pair of sister bells from Princess Kiku, before her mission which are later revealed to be crafted from the Jewel of Virtue, for the purpose of negating the power of the other two jewels and preventing their misuse. Ayame defeats Tenrai, forcing him to absorb the power of the jewels, but to his surprise, Ayame still defeats him, prompting him to offer his body and soul to Lord Mei-Oh through a portal, just then Tatsumaru and Rikimaru arrive to assist with Tatsumaru leaping into the portal with explosives, while Rikimaru and Ayame flee the fortress. If Ayame fought against Onikage at Amagai Castle, then Tenrai fades from existence and his fortress caves in. 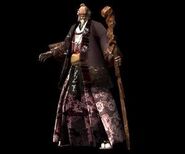