Tenchu ​​One Thousand Wars (天誅 千乱, - Tenchū Senran?), released in North America as Tenchu Z, is the eighth game in the Tenchu series. It is different from previous games in the series in that the player creates their own ninja characters, then builds up their skills as they play through the game rather than choosing from a small selection of pre-made characters, as they take orders from the series' previous main male character, Rikimaru. It features four-player cooperative play through Xbox Live. The game contains 50 missions with different difficulty settings and objectives. Characters also have different attributes (which are strength, agility and health) that can be altered to the player's liking.

The House of Gohda, where the Azuma Ninja Clan of ninja reside under the service of Lord Gohda, is on the brink of war with the neighboring country of Ogawara. As a new recruit in the Azuma clan, the protagonist is sent to assassinate those who are assisting Nagayori Ogawara, including army officials and spies who have infiltrated the House of Gohda, as well as recover stolen items and rescue prisoners. In between thwarting country of Ogawara's plans, the protagonist also receives missions in which he or she eliminates "evil" people such as abusive monks, gangsters and greedy merchants.

Gameplay is relatively the same as the previous games in the series. The main difference is that players create their own character and unlock new skills, items and clothing for him or her as the game progresses. Only one fighting style is available: a ninjato that can either be set with slower but more damaging attacks (the same as Rikimaru's in previous games) or faster and weaker attacks with different animations. The unlockable skills however are more varied, with most of them making their first appearance in the series while others return from previous games with some tweaks. Certain skills can be upgraded twice, enhancing the protagonist's abilities beyond those of the characters from previous games.

The game's character edit features are quite in-depth, allowing you to use gold obtained by doing well in missions both in single player and multiplayer to purchase new aesthetic styles for your ninja, new abilities, items to use during missions, and different special attacks to use in combat, in addition to combo-editing abilities.

In January 2007, Microsoft announced they would be publishing Tenchu Z in North America. A demo is available on the Japanese Marketplace, which, in North America, was later included in its original Japanese language form on the Holiday 2006 demo disc of Official Xbox Magazine. In June 2007, the demo was made available on Xbox Live Marketplace in the remaining regions.

Hold Up, Down, Left, or Right after completing a mission before the "Mission Completed" screen appears to do one of four alternate victory poses.

Successfully complete all 50 missions under the Hard difficulty setting with a Ninja 5 rank.

Kill 50 Tomikichi to unlock the Special Costumes, which include the Lion Costume (face), Hotdog (sheath) and Kite and Flag (accessory). 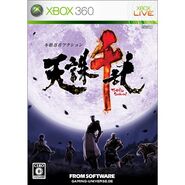