Tenchu: Stealth Assassins (立体忍者活劇 天誅 Rittai Ninja Katsugeki: Tenchū, Tenchu: Stealth Assassins?) is the first game in the Tenchu series. Created and designed by Takuma Endo of Acquire, Tenchu has been cited as one the most influential games in the stealth genre. The game was also the start of a long lasting franchise, consisting of nine releases over the first decade of its existence. Tenchu was originally owned and published by Sony Music Entertainment Japan.

Canonically, the storyline takes place after the events seen in Tenchu 2 and Dark Secret.

Note: The following is a description of the American, English version of Tenchu: Stealth Assassins. The game is mission based and therefore has a semi-flexible plotline. In the game, you may choose who will be the main protagonist; The Shinobi (male ninja) Rikimaru, and the Kunoichi (female ninja) Ayame. To limit confusion about the plot, and character specific details, the story is told here through each mission.

The game takes place in Feudal Japan, and revolves around two characters; Rikimaru (力丸) and Ayame (彩女). They are members of the Azuma ninja clan, who are loyal to Lord Matsunoshin Gohda. The Ninja clan serves his lord as spies and assassins to maintain the safety and honor of the Gohda province.

In the final cut scene, it is revealed that the secondary protagonist has saved the princess and that the three must make it out of the crumbling caves. Rikimaru lays his sword down so that he may shift a boulder so the others can get out. Ayame and Kiku make it to safety, but Rikimaru is left behind. Ayame watches Kiku reunite with her father, and plunges Rikimaru's sword into earth. Edit. 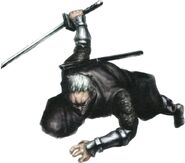