Tazu was a noble and dedicated warrior, though her abilities were not on par with Senjuro's. Her weapon of choice was a halberd. She was killed by an Azuma ninja while guarding a checkpoint gateway.

If the player goes through the level with Rikimaru Tazu prevents him from going through the checkpoint and asks where he is going.  Rikimaru respectfully asks her to let him pass, as he has no desire to kill her.  Tazu refuses and engages him in combat, which ends when he fatally wounds her.  The ninja acknowledged her as a brave and honorable opponent, and lamented that fate denied her the chance to be a happy and ordinary woman.

Tazu stops Ayame as the kunoichi approaches the gate.  Upon asking her where she is going, Ayame insults her by telling her to find a boyfriend and stop playing with her "daddy's weapon."  An enraged Tazu attacks and is defeated by the Azuma.

Tazu was a human and possessed no magical powers. She wielded the halberd with a considerable amount of skill, but her prowess in combat was inferior to that of the Azuma. 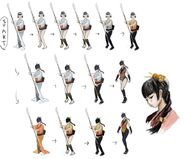