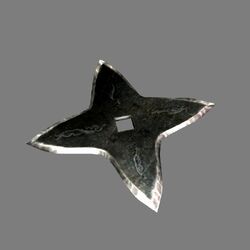 Also known as Ninja Stars referring to its shape, Shuriken (手裏剣) is a star-shaped throwing blade utilized by Shinobi and Kunoichi, one of most common weapons ninja carry in their arsenal. A shuriken thrown to the cranium of a guard is a classic way to perform a Hissatsu.

Shuriken is a throwing weapon in form of sharpened, four-pronged star with a hole in the center constructed from thin, flat plate of metal. Though it can be used to lethally injure the opponent provided one targeted their vital point (ex. cranium), this throwing weapon mostly designed to distract or disable them. Utilizing it requires a great deal of practice to properly aim and throw.

A shuriken star can be retrieved from the body of targets and used again. When enemy ninja prepare to throw one, the player can knock it from their hand and pick up the item for themselves, much like Healing Potions. If it misses a target and lands in a wall or the ground it can also be retrieved.

A stronger version of this item is the Super-Shuriken, which hurls eight Kunais that are thrown simultaneously. 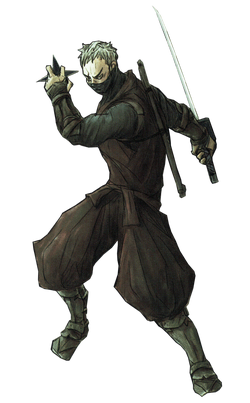