Rinshi (凛姿, Rinshi?) was a mysterious kunoichi of the Shida ninja whose early life is unknown.

She was in league with Onikage and sought revenge on Lord Gohda. Rinshi kidnapped Kiku and disguised as Rikimaru closed her at the mansion belonging to Ginzou Gonbei. She ordered Gonbei to ambush Ayame at old village. She met Rikimaru after he killed Mononari Tado and was about to finish him when Hyakubei Tachibana and his troops saved him forcing Rinshi to retreat.

Once again disguised as Rikimaru she attacked Ayame when she rescued Kiku making everyone believe that Rikimaru is a traitor. After Ayame brought Kiku back to castle, she switched place with Kiku and disguised as her she ran with Ayame leading her into trap. Before she could kill Ayame she was stopped and killed by Rikimaru.

Rinshi was master of disguise, able to mystically appear and sound like anyone. She was also quite skillful to use fan as her weapon, making a formidable opponent against Rikimaru. 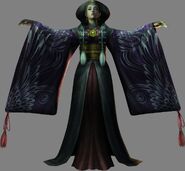