Nagayori Ogawara (緒河原 永頼 Ogawara Nagayori, Nagayori Ogawara?) was the former Daimyo who served as the head of the House of Ogawara and the Lord of the country that shares his namesake. Nagayori Ogawara was a clear-headed, determined, violent leader who declares war upon the House of Gohda and various other neighboring countries. He employs Shigi and the Ogawara Ninja in service to his country. It would seem that he is the son of Aizen Nobumitsu (相壇 信光).

Waging War with Other Countries

The country of Ogawara was first mentioned by Rokube Echigoya as he sipped tea saying "Those Ogawara sure are tough". Nagayori Ogawara had many officials, spies, ronin, samurai and ninja stationed all throughout their territory, as well as within the boundaries of the House of Gohda. Even the small countries that bordered the two had Ogawara agents in them. An Ogawara Official, Kimura Isaemon, is assassinated by the Azuma ninja after Lord Gohda learned that he was involved in plans against them. With his last breath, Isaemon reveals his country's intentions: "Killing me will achieve nothing! The House of Gohda is a small country... And soon, the country of Ogawara....will destroy it."

Having already started many wars with other countries, the small country of Kawachi soon found itself the next target. However, Kawachi was informed by their Lord Gohda allies - who dispatched an Azuma ninja to cross the Reito Bridge with a secret letter of warning. Despite this, Nagayori Ogawara remained undeterred. Its well polished war-machine was establishing connections with foreign weapons makers and dealers. An Ogawara merchant eventually obtained matchlock gun blueprints, prompting Lord Gohda to act. The designs (stowed away in Ogawaran Asari Castle) were a threat to Lord Gohda's military presence and would have been a serious problem on the battlefield. An Azuma ninja was sent to steal them as a preemptive measure. While Nagayori Ogawara's progress had been delayed, the large country was already in the process of producing these politically destabilizing weapons. They just hadn't been deployed in the field yet.

Nagayori Ogawara's military forces were massive and their apparent political and military influence was widespread. This made acquiring yet more resources and manpower an easy task for the war hungry country. Realizing their predicament, Lord Gohda retaliated by deploying Azuma Ninja on a number of missions to covertly undermine his war efforts. Through sabotage, assassinations and other acts, the tides began to turn in the smaller country's favor. Seizing their opportunity, the Azuma Ninja intensified their efforts. This included the assassination of the Dutch arms-trader Piet Niklet, a key supplier to him and burning down his Kodoma fields to prevent it exporting it as Shishi. The final blow came when General Shinzo Kurokawa, his top military commander, was assassinated by an Azuma Ninja, effectively crippling the army.

With his plans of conquest in ruins, he retreated to his castle to lick his wounds. However, the Azuma Ninja had no intention of allowing him to recoup and sent one of their Ninjas to finish off their enemy once and for all. Nagayori Ogawara remained angry and defiant and engaged the Ninja in battle, but when Shigi suddenly showed up and backstabbed him, he was ultimately killed.

Nagayori Ogawara was a ruthless, bloodthirsty and power-driven samurai lord. His sole ambition seemed to be expanding his power through conquest, which ultimately leads to his invasion of the House of Gohda. He is a man without compassion or conscience and thinks nothing of taking the lives of others. This was evident when he killed an unarmed servant simply to test the effectiveness of a newly forged katana. He then asks Shigi about his progress in torturing a captured Azuma Ninja, remarking "Has the Lord Gohda cracked yet?" When Shigi replies that the ninja has not yielded any information, he then demands that they be disposed of - remarking "It's not in my nature to let the weak live."

Nagayori Ogawara's actions were self-serving and egotistical, showing little regard for others. General Shinzo Kurokawa is perhaps the only exception, as the success or failure of his military campaign rests in the General's hands. He also shows no qualms about using underhanded tactics, such as funding insurgents and employing criminals to cause trouble in the House of Gohda. 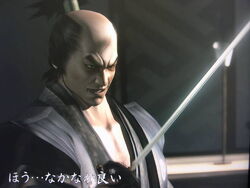 He resembled samurai of that day and age. His clothes had blue color scheme, similar to his soldiers' uniforms and military standards. The Ogawara Mon (or crest) was embroidered on the back of his haori (or overcoat). He always carried both a katana and wakizashi with him. He had a very unique hairstyle, with the hair on top of his head removed purposefully and the remaining pulled back and into an outward standing ponytail. His scowling facial features showed the contempt and malice that wass very much a part of him. There was also a sense of barely contained anger that seemed to always be with him. This was displayed when his plans were in ruins as he remarked "Sake is much sweeter with malice and hatred."

Nagayori Ogawara was still a skilled swordsman and is ready to fight when confronted by the Azuma Ninja sent by Rikimaru. In combat, he fights with a customized Naginata-style spear that's fitted with a Matchlock gun on the end. (Presumably made after establishing connections with a foreign matchlock gun designer.)