Lord Gohda began leading sometime after his fathers death, during the warring states period. As Daimyo, Lord Gohda has led his country through war and peace, even though his country was small. Though economically it has been greatly aided by the fact it contains a gold mine. Lord Gohda rules with the philosophy of happy subjects equals an atmosphere of peace and prosperity. Once stating to his uncle Gohda Motohide: "You're wrong uncle, the people are the soul of this land." In his life Lord Gohda had once married and had one daughter. Both his wife Lady Kei and thei daughter Princess Kiku, have both passed on in the warring states period. Even after such loss, he has still cherished his people and their safety. Aiding in this difficult and endless endeavor are the Azuma Ninja, who have throughout the generations protected his country from the shadows. Lord Gohda is passionate, but when his country or the stability of his people is challenged or threatned, he is a fearsome samurai prepared for war.

After the fall of Tenrai, Azuma Ninja Master -Rikimaru reported, that neighboring country Tado sought to start a war. When this was confirmed, Lord Gohda, without hesitation, declared war on his neighboring enemy. When the country of Ogawara was seeking to declare war on an unaware Kodachi, Lord Gohda authorized the deployment of an Azuma Ninja to warn the small country.

Lord Gohda is highly skilled in the art of Kenjutsu, able to wield the katana with grace and balance. During the war with the Burning Dawn, Lord Gohda helped defend the Azuma Village, killing enemy ninja during the battle. Usually, the samurais look down on the unorthodox methods of war employed by shinobi, shown by Lord Toda, Gohda Motohide and Jubei Tachibana. Lord Gohda shows a great deal of respect to the Azuma Ninja of his country, holding them in high regard to carry out unconventional operations that greatly affect the tides of war that his country frequently are forced to face.

Lord Gohda as he appears in Tenchu: Shadow Assassins 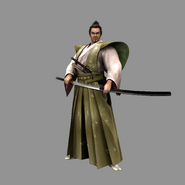 Lord Gohda as he appears in Tenchu Z
Community content is available under CC-BY-SA unless otherwise noted.
Advertisement