Ayame (彩女, a homonym of the word for "iris" meaning "colourful female?) is a longtime member of the Azuma Ninja Clan, dedicated to Lord Gohda Matsunoshin and his family. She is particularly close to Lord Gohda's daughter, Princess Kiku.

She is one of the lead characters in all subsequent installments of all Tenchu game series except of Tenchu Z and has been well received by gaming mass media, often perceived as one of the top assassins and best female ninja characters in video games.

In the events of Tenchu 2: Birth of the Stealth Assassins, Ayame was the last student chosen by Azuma Shiunsai, the former grand master of a long lineage within the Azuma Ninja. She was blessed with raw talent, but a bad attitude. However, she was very curious and willing to learn new techniques, but she is never patient enough to fully master one.

During the Warring States period, Azuma Shiunsai traveled to Kyoto. Kyoto lay in ruins as warring clans fought for the ownership of the then small village. He came across a young girl on the riverbank watching corpses of fallen samurais and slain innocents floating by. It was very strange for Azuma Shiunsai to see a young girl in the midst of all that desolation. He searched for the girl's parents, but he could not find them. The girl herself appeared to be in shock. She knew her name and age, but that was all. Azuma Shiunsai could not bear to leave the girl behind, but he had no idea what he would do to a young girl. He couldn't train her to be a female ninja or better known as kunoichi, that much was clear because as a private man, he didn't have the knowledge or resources to train a female ninja. He knew nothing of the ways of the hearts and emotions. What could he teach a girl about a kunoichi's use of seduction or hypnotism? As he prepared to turn his back on the young girl clutching at his sleeve, Azuma Shiunsai thought he detected in her the makings of a ninja. He decided to take her home after all.

He raised her the only way he knew how as a regular ninja, like Tatsumaru. Judged on her natural abilities alone, Ayame was the most talented of Azuma Shiunsai's three students. Despite her late start and her tender age, Ayame was initiated into the circle of ninja at almost the same time as Rikimaru, when she was only 12 years old. She has developed a strong relationship with Lord Godha's daughter - Princess Kiku, after witnessing the death of Princess Kiku's mother - Lady Kei. Ayame had become like an older sister and best friend to her, that resulted from protecting her at all costs. As a symbol of their relationship, she and the princess both always wear their sister bells close to their hearts.

In Tenchu: Stealth Assassins, Rikimaru and Ayame were sent to rescue Princess Kiku who was kidnapped by Lord Mei-Oh. Both ninjas went through a lot of fighting with several skeletal samurais and fire-breathing zombies. Rikimaru defeats Onikage and searches for the kidnapped princess in the underground tunnels. Finally, the ninja confronts the evil lord in a deep cavern, where he had opened a portal.

While attempting to escape with Rikimaru and Princess Kiku, they found that they were trapped, a cave-in blocked their path. With the ceiling about to fall, Rikimaru set aside his sword - Izayoi, lifted the boulder that blocks the path and ordered Ayame to take Princess Kiku and Izayoi so they can escape. The two of them escaped the tunnel just before the rocks buried it completely, leaving Rikimaru behind. Ayame stuck Izayoi into the ground as a grave marker for Rikimaru. Then, Ayame, Lord Gohda and Princess Kiku look off to the rising sun.

After losing her clan member, Rikimaru, peace maintained in Lord Gohda’s lands. One day in her travels, Ayame came across a decimated ninja village. She hoped to find survivors but arrived too late. The ninjas of unfamiliar village Hagakure, died whispering the word "Kuroya" with their final breaths. As she was about to leave, a young female ninja arrived and stood in her way. Her name was Rin, who was also devastated to see the village in ruins. Rin and Ayame fought together and their fates become "inextricably intertwined."

In the events of Tenchu: Shadow Assassins (Tenchu 4), the land of Lord Gohda, peace has not been fully restored and rumours of betrayal have been swirling around the lord and his subjects. As a result, Lord Gohda calls upon the Azuma Ninja, Rikimaru and Ayame, to investigate. Rikimaru soon discovers that someone is planning to start a war. Meanwhile, Counselor Sekiya Naotada, Lord Gohda's right-hand man, arranges for a fortune-teller to predict the future of Lord Gohda's kingdom. Unfortunately, the fortune-teller turns out to be an imposter and kidnaps Princess Kiku.

Rikimaru goes on another mission for Lord Gohda: resume the investigation on the nuisances that have been troubling the land, while Ayame chases after her without hesitation instead. There Rikimaru discovers that Daimyo Tado is the one behind all this. Lord Gohda then decides to declare war on DaimyoTado and travels to his land with Rikimaru. After Rikimaru succeeds in taking Daimyo Tado's life, the woman who posed as the fortune-teller, a Kunoichi named Rinshi, appears and tries to kill Rikimaru, but fails thanks to the intervention of Tachibana Hyakubei, who was hired by Lord Gohda. After Lord Gohda's order, Rikimaru heads back to the castle. As he arrives however, the guards, who were ordered to consider him a traitor by Sekiya, attacked him. Ayame had actually succeeded in rescuing the princess, but had been attacked by someone who seemed to be Rikimaru, who was actually Rinshi in disguise. Ayame and Princess Kiku then flee the castle, as the real Rikimaru arrives and the two of them head for a secret hideout suggested by Sekiya. The Princess then reveals to be Rinshi in disguise and wounds Ayame, but Rikimaru arrives just in time to save her and kills Rinshi.

Lord Gohda, noticing his castle in flames, realises that it was all Sekiya's doing and orders Rikimaru to get back there and eliminate him. After he seemingly takes Sekiya's life and saves Princess Kiku, Sekiya rises again and reveals himself to be Onikage, who then challenges Rikimaru to a duel. Rikimaru ultimately gains the upper hand but Onikage uses the princess as a shield, forcing Rikimaru to drive his sword through her to get to Onikage and kill him. Ayame, who had followed Rikimaru, cries upon the princess' death. The extended ending (attained by collecting all of the map pieces in normal mode) shows Ayame speaking in Onikage's voice, suggesting his hatred survived in her since Rikimaru murdered her little sister and best friend.

As the most talented student chosen by Azuma Shiunsai, Ayame is extremely skilled, despite her late start and younger age. Though uninterested and impatient at first, Ayame gained a great discipline and desire of strength after the events in Tenchu: Birth of the Stealth Assasins. Since then, she has obtained a set of skills different from Rikimaru and very deadly. She is able to move faster and smoother than Rikimaru, thanks to her light and flexible body type. This also requires her to have less muscle mass, so she is not as physically strong as her clan member. This is demonstrated in their own hissatsu, when Rikimaru simply has to grab and opponents neck and pull to break it, while Ayame sometimes needs to swing the enemy with her full body weight to achieve this.

She often uses her full body weight, like jumping on opponents to knock them down or even sitting on their shoulders with their heads between her legs, prompting her to give a full body turn and break the neck. This style of combat that uses the entire body as a weight is quite different from Rikimaru, who seems to limit contact with the foe to only his hands and sometimes only his sword. Ayame is also capable of using an enemy's sword against him, but she is not as inclined to do so as Rikimaru is. Also, she seems to like taunting her enemies before she kills them. Rikimaru on the other hand appears to be somewhat respectful, even apologizing at times before taking an enemy's life.

Ayame's style which takes advantage of her flexibility and ability to throw around her light weighted body is typical of most female ninja in their combat. She uses her twin blades effectively and powerfully, making her skilled in swordplay as well. Overall her combat style and swordplay is rather formidabble indeed, however they are still slightly less compared to that of Rikimaru.

Ayame is the youngest student of Azuma Shiunsai who joined the Azuma Ninja Clan. Soon after her initiation, however, internal turmoil and war befall her native country as her duties to her Lord, ninja clan and her friend, Tatsumaru, whom she fallen in love with, fall apart. As a 12 year old kunoichi, Ayame has a sharp tongue and deadly techniques. Her character changes from a laid-back girl into a more mature, accepting woman.

Seven years have passed since Ayame lost her master Azuma Shiunsai, clan member and love Tatsumaru during the events of Tenchu 2: Birth of the Stealth Assassins, she has matured a lot and improved her skills. Her fighting style is a lot quicker and smoother than Rikimaru's, although she is a bit weaker than him. She is tough, killing her enemies’ cold blooded without the sign of any doubt or hesitation, though she knows feelings like emotion, sadness and desperation. Her sarcasm is as feared as her sharp blades.

Ayame is seen wearing a different outfit than most of the kunoichis. Throughout the games, she wore a black top that reveals her bare shoulders and part of breast that is wrapped in sarashi. She wears sarashi on her arms as well. She also wore a black hakama that it's sides showing a bit of skin in her legs as she uses a ninja tabi, a typical ninja shoes.

However, her costume was completely different in Tenchu: Shadow Assassins. She is seen wearing a dark pink kunoichi outfit and an armor covering her arms.

In Wrath of Heaven, her outfit is basically same as the current one, except that the top has been replaced with one akin to modern-day sleeveless tunic that reveals her midriff and has what seemed to be leather breastplate attached over it. She also wears a gauntlet over her arms and her hakama reveals less skin of her legs. 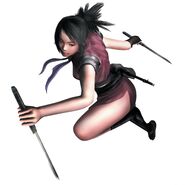 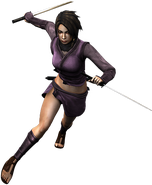