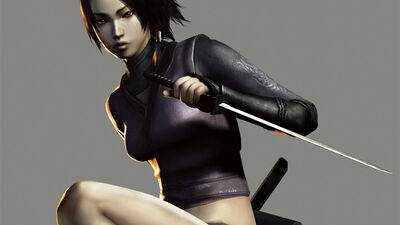 Ayame (彩女, a homonym of the word for "iris" meaning "colourful female?) is a longtime member of the Azuma Ninja Clan, dedicated to Lord Gohda Matsunoshin and his family. She is particularly close to Lord Gohda's daughter, Princess Kiku. She is one of the lead characters in all subsequent... 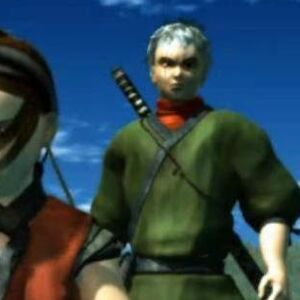 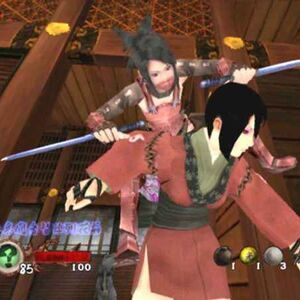 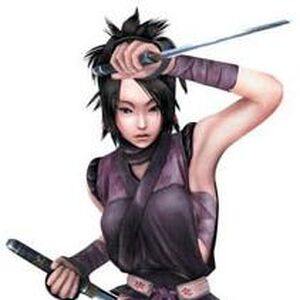 I Once wrote a fan fic about my vision of what a reboot (It´s not very good but i wanted to share) Before i get started the story would borrow heavily from tenchu 2 so any similarities please remember is a just a fan version so Rikimaru story: His story would start as the original only with a few differences

2: There is only 2 ninjas Rikimaru and onikage (Yeah you heard right)

3: Rikimaru would still be in his teens

Kagami: It was a sucess the toda received a significant blow with the fall of their house and the death of their heir

Ayame: There is one more thing I didn't mentioned

Kagami: What is it ayame Ayame: that ninja who came here the otherday he was there

Kagami: the azuma ninja? What was he doing there?

Rikimaru then steps in and say

Rikimaru: She said I needed to complete a trial and I did Rikimaru throws toda's blade and everyone is shocked by it (especially ayame) Ayame then says "wait you actually did it I can't belived" Rikimaru then is confused by her answer and lady kagami even more confused demands a explanation from ayame Ayame then explains that she actually was trying to get rid of rikimaru because of lady kagami orders of not Letting anyone discover their intentions Lady kagami then forgives ayame because she actually did say that nobody could discover about the burning dawn Kagami then questions rikimaru asking if his master changed his mind about aiding her Rikimaru then gives her the news about his master death and how cowardly he was killed Lady kagami then infuriated by what she heard tells rikimaru that she is going to make sure that motohide pays for what he did Rikimaru then request to join the burning dawn which kagami glady accepts him saying that a azuma ninja will be a great addition to her cause She then explains what the burning dawn stands (is pretty much the same as the original just the difference is that fire demon wans´t build by slaves it was build by people who actually support kagami) she then presents rikimaru to the four lords

Minase, The green eagle (A Archer who looks like a bum)

Ayame, The white fox (I don't need to tell who she is)

She then explains their plan to defeat house gohda The first step is to kidnap motohide daugther princess kiku (yes you heard right) who is hidden in mansion that is heavily guarded So kagami instruct Kazādo and rikimaru to the mission The both then go to the mansion when they got there they notice a giant group of soldiers Rikimaru then says he will sneak in but Kazādo ignores him and break throuth the front gate rikimaru then joins him and they fight their way in After they reached the entrance they are confronted by a fully armored samurai and Kazādo tells rikimaru to get the princess rikimaru gets to the princess chambers and finds the princess about to get killed by a man throwing knives at her Rikimaru then steps in and saves the princess and kills the men The princess than ask rikimaru who he is and what is he doing there? (Rikimaru see several marks and bruices on her) Rikimaru than tell her that he was there to kidnap her Princess kiko than stands up and agrees to go with hím (rikimaru is surprised by that) and the two make their way to entrance where Kazādo is uncontious The fully armored samurai presents hinself as Senjuro Akechi and tell princess kiku to not even think about leaving because her father paid them too well to let her leave (princess kiku hide behind rikimaru in fear) Rikimaru then questions what did they do to her where Akechi responds "don't worry she still a virgin we only played few games with her" Rikimaru infuriated draws his blade and prepares to battle The two engage in a battle where rikimaru needs to finds way to penetrate his armor After rikimaru manages to give him enough hits Kazādo wakes up infuriated he grab his Axe and hits Akechi breaking his armor entirely while he is on the ground Kazādo stands there grinding his teeth while he screams and begs while rikimaru and kiku leave Back to the hideout princess kiku tells lady kagami that rikimaru told her everything and that she can give her informations about her father's army Lady kagami is very surprised and satisfied with it Rikimaru then explains to her everything about what happend in the mansion and he hatred towards motohide increased She then tells rikimaru that they need to move to their new "home" in order to continue their plans Rikimaru then is presented to the fire demon a week passes by during their trip in this rikimaru gets close to all the members of the burning dawn (especially ayame) and princess kiku is getting really clingy towards hím During one night rikimaru see's kagami praticing her sword play and she ask him to duel her where rikimaru is defeated Kagami tell's rikimaru that he should not bury his fealings rikimaru ask what she means

Lady kagami: your master always belived that passion was a weakness but he was wrong A warrior without passion is like a river without water You must use your passion if you ever hope to defeat your enemy

Lady kagami: come and let it flow like a river

Motohide: (laughs) so you came avenge your master isn't?

Rikimaru: You're going to pay motohide, pay for my master, for kiku for everyone

Motohide: then you don't know? Ofcourse you don't,Shiunsai never had a reason to tell you

Rikimaru: TELL ME WHAT?

Motohide: My father had three sons Matsunoshin,Tenrai and me motohide then one day my father growed sick out of nowhere died in his sleep and the oldest brother matsunoshin becomes the lord of the house Then the middle brother Tenrai orders a ninja to kill hím but the ninja didn't just kill him he also killed his wife and his newborn son

Rikimaru: this ninja was my master but what does this have to do with me

Motohide: before your master died he told me he never killed the son, my bother and his wife were killed 16 years ago,how old are you boy

Rikimaru: No it can't be

Motohide: So i was right, is ironic my brother always had a deep hatred towards ninjas and his own son became one it´s hilarious

Rikimaru: no this can't be true

Motohide: you're master killed your parents, and took you to train like a dog

Motohide: how does it feal nephew to destroy your own family

Motohide: Did you enjoy my daugther how does it feal to touch your own blood

Ayame: (Cries) first my mother and my father and now lady kagami you can´t die too rikimaru

Rikimaru: I´m sorry ayame but i can´t let this go not after everything he did i won´t be able to live with myself if i don´t confront him now

Ayame: Rikimaru look around you all this death and destruction it wasn´t motohide that caused it was us we are no different from the people we fight we only hide behind a dream that is not even ours i never belived lady kagami´s dream i just followed her because i owned her everything but now that she is gone i see everything we did is wrong and now you´re about to throw your life away because of revenge?

Rikimaru: It's not revenge it's...

Ayame: You hate him because he betrayed you,he was you're friend and he tried to get you killed,please rikimaru this not worth it it's not worth your life,please don't leave me

Rikimaru then gently kiss ayame forehead and says "Don´t worry i won´t be leaving you so soon" ayame then let go of rikimaru,Rikimaru then climbs into the front back and meets onikage

Onikage: Rikimaru I was waiting for you

Rikimaru: Why onikage? Why did you do all of this?

The two look to the village burning and the screams

Onikage: Chaos is the will of my lord

Onikage: I wasn't talking about your uncle rikimaru I only serve one lord

Rikimaru: I don't care who you serve onikage

Onikage: you're weak rikimaru that's why you will never beat me you allow your emotions to make you weak

Onikage: Well done rikimaru I guess I was wrong when my lord finally comes you better be ready because this won't be enough to stop hím

Rikimaru: What are you talking about

Onikage: He told me to do all of this he made me betray the master he......

Mei-oh: You no longer usefull so is time for you to end

Onikage: Rikimaru you need to be prepared you're the only one who can stop hím now AAAAHHHHHH

Rikimaru then see onikage collapse unable to help hím He then mourne yet another death Afterwords rikimaru is preparing a grave to lady kagami putting her sword in the grave he then is surprised by ayame who as him how he is doing Rikimaru says he was fine but then ayame hugs him Rikimaru: Ayame Why? Ayame: Don't pretend you're not sad Rikimaru: I..... Ayame: You're not alone anymore rikimaru there is no reason to suffer in silence Rikimaru starts to cry and hugs ayame back

Mei-oh: Onikage has been defeated and that boy will pose a treat to me in the future

Ninja: My lord we can´t allow him to interfere

Mei-oh: Don´t be stupid the boy might be strong but he will never be able to defeat me in my full streath but i will need the izayoi to return

Mei-oh: That sword was used as a key to seal me in the portal and is the only thing that can open it now the boy has it

Ninja: I see i will recover the sword no matter the cost